LIVE From Your Speakers: Rufus and Chaka Khan, STOMPIN’ AT THE SAVOY 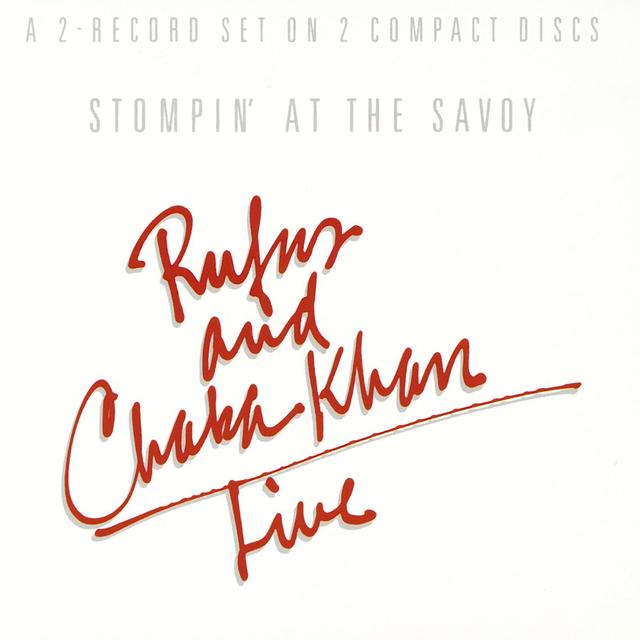 After a string of gold records in the mid-’70s, the funk band Rufus and their lead singer Chaka Khan found themselves at an unsettling point in their partnership. Khan was obviously the focal point of the band, the one member most often featured on magazine covers and the one called out on their album art (was it Rufus, or Rufus featuring Chaka Khan, or Chaka Khan and Rufus, or Rufus and Chaka? Depends on which record you had in your hands). In 1978, she made a solo album, and the band made alternating records with her (like that year’s STREET PLAYER and 1979’s MASTERJAM) and without her (1979’s NUMBERS and 1981’s PARTY ‘TIL YOU’RE BROKE) ‒ the ones that featured Khan were well received; the ones without her … not so much.

This back and forth continued for a few years until Khan left for good and the band decided to call it a day, with both parties agreeing to make one last record together before turning out the lights. Recorded live over three nights at the Savoy Theater in New York City, 1983’s STOMPIN’ AT THE SAVOY gives listeners a tour of Rufus and Khan’s finest moments together, one final, funky nostalgic trip to remember them by.

“You Got the Love” kicks off the record with a requisite stomp, and after a tentative opening, Khan lets loose and the party truly begins. The one-two pop of the slow jam “Sweet Thing” and the irresistibly funky “Tell Me Something Good” highlight the first side. Elsewhere, “At Midnight” takes its breakneck pace and horn spiked instrumentation and pushes Khan and her background voices into the fast lane. Those voices get things more than a little sultry on “Stay” and “What Cha Gonna Do for Me,” and make “Do You Love What You Feel” a satisfying, dance floor-filling set-closer.

The studio material on STOMPIN’s fourth side is good stuff, too, particularly the single “Ain’t Nobody,” which was pretty ubiquitous on R&B and Top 40 radio in ‘83, and for good reason ‒ it’s a more or less perfect distillation of all Rufus and Khan were capable of, from groove to melody to vocal. “One Million Kisses” is a mid-tempo pop number and was a minor hit, but it pales next to the fire that “Ain’t Nobody” set.

STOMPIN’ AT THE SAVOY put a cap on Rufus and Chaka Khan’s recorded partnership and stands as a fine farewell from one of the great popular funk acts of an exceedingly funky decade.

Stompin' at the Savoy

More on Rufus and Chaka Khan