Read All About It: Woodstock 50: Back To The Garden 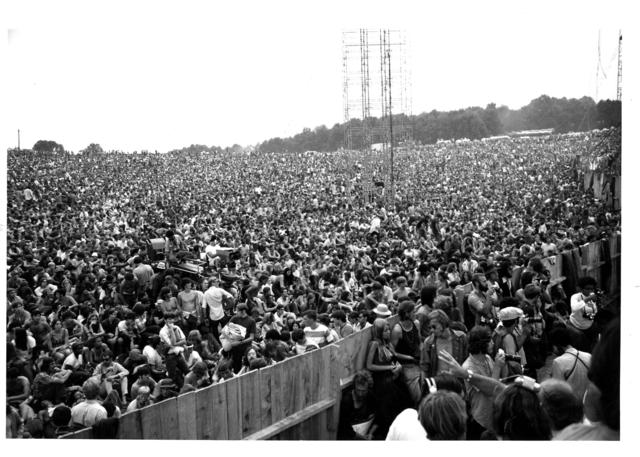 Stay tuned to this page where we will be postin' up excerpts from the liners from WOODSTOCK - BACK TO THE GARDEN: THE DEFINITIVE 50th ANNIVERSARY ARCHIVE.

The history of Woodstock, as it’s generally understood, has less to do with the events on Yasgur’s farm than it does with how Michael Wadleigh structured his film of those events. He selected moments he was fortunate enough to have footage of and neglected other performances that hadn’t been filmed, had less compelling visuals, or he couldn’t obtain permission to use, then assembled a film in a manner that embraced spectacle at the expense of chronology. In doing so, he created a narrative about Woodstock that quickly became accepted as the de-facto historical record. As a result, almost everything we think of today as an important Woodstock moment was chosen for us by Wadleigh–whether it was actually important at Woodstock or not.

Take, for example, Jimi Hendrix performing “The Star-Spangled Banner.” It’s generally considered not just a great performance but an important one. But why, exactly?  Hendrix had been playing “The Star-Spangled Banner” in concert since April 1968—18 months before Woodstock. There are, in fact, at least 40 documented “Star-Spangled Banner” performances prior to its Woodstock appearance and another 20 after. It wasn’t unique. Nor was it especially well received, because by the time Hendrix got around to playing it on Monday morning, near the end of the festival, there weren’t many people there to hear it; most of the audience had already gone home.

So, the Woodstock “Star-Spangled Banner” is a performance whose cultural status stems entirely from Wadleigh making it a climactic moment of his film and from its appearance on the soundtrack. (Want to know which of the acts at Woodstock—the ones, unlike Hendrix, people actually saw—made the largest impact in the moment? Judging from the audience response: Ten Years After, Sly & The Family Stone, and Canned Heat.)

Wadleigh’s film tells a story of Woodstock, but it doesn’t tell the story….If Wadleigh’s film is a kind of psychedelic Busby Berkeley musical, this archive is an audio-verité documentary. Which one is “better”? In the immortal words of Woodstock announcer Chip Monck: “It’s your own trip, so be my guest.”

Woodstock is often portrayed as the pinnacle of the 1960s counterculture, a three-day idyll during which, by some accidental alchemy, an Aquarian vision manifested itself as real. For better or worse, I tend to view it as an inflection point; the moment when the counterculture became the culture. The “little living rooms” from earlier in the decade that John Sebastian remembers during his performance had given way to a ferocious generational energy and a promise of enormous change. What happened to that promise and that energy? The answer depends upon whom you ask and when; it would have varied not just one or five or ten years after Woodstock, but 49 years after, as I write these words. A hundred years from now, when everyone who attended or performed at Woodstock is no longer here, I suspect it will still be debated. And, in large part, that’s what this big box is for: to allow people, in little living rooms still to come, to discover their own answers.

Listening to this full-length Woodstock reconstruction is a form of time travel. It’s a snapshot of an era’s musical tastes, enthusiasms, recreational substances, slang, mating rituals, wardrobe choices and ways of thinking about itself. And if that snapshot has faded slightly, if some of those enthusiasms feel misguided, if some of those choices seem embarrassing now, it’s worth considering that everything around us in 2019 is likely to seem similarly quaint from 2069’s perspective. By the time we celebrate the 100th anniversary of Woodstock, much of what presently constitutes “we” won’t be here for the birthday party. Already, a vast quantity of the performers are gone; just as importantly, we’ve lost and are continuing to lose the people who were in attendance. We’ll be able to watch and listen and read about it, but there will be no one left to tell us firsthand about the mud, or the traffic jams, or what it felt like to see Jefferson Airplane as the sun was coming up. All of the mythology of Woodstock is here in this box—or at least everything that would eventually create that mythology. The reality is here too. And neither invalidates the other.