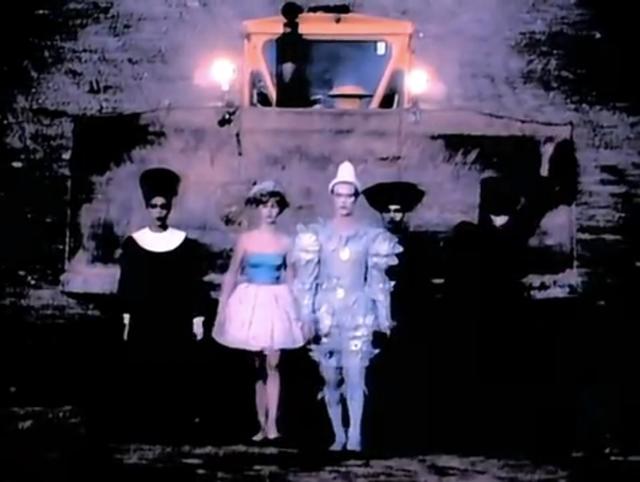 It's an anecdote that's become rock legend: David Bowie, costumed as pantomime character Pierrot on a deserted stretch of beach in East Sussex, England. The singer is followed by Steve Strange of the band Visage and other wildly dressed denizens of London's burgeoning New Romantic community, filming the "Ashes to Ashes" music video. With the colorful cast of characters being trailed by a large bulldozer, they set quite the scene.

According to Bowie himself (as told to crew member Michael Dignum during the filming of David Bowie: Miracle Goodnight in 1993), an older man with his dog walked right into the shot, oblivious to what was happening. When video director David Mallet asked the man to move, he pointed to Bowie and asked, "Do you know who that is?" The man looked at the world renowned artist, all styled out for the video, and said: "Of course I do. It's some c-nt in a clown suit."

"That was a huge moment for me," Bowie told Dignum. "It put me back in my place and made me realize, 'Yes, I'm just a c-nt in a clown suit.'"

It's an apt metaphor, as "Ashes to Ashes" served as something of an epilogue for one of Bowie's most famous characters: Major Tom, from the 1969 single, "Space Oddity." Now cast as "a junkie/Strung out in heaven's high/Hitting an all-time low," the quiet demise of Major Tom wrapped up the heady 1970s decade as the artist faced the approaching '80s.

Musically, the song set the stage for the encroaching decade with an ominous clash of synthesized guitars , hard funk bassline and dissonant guitars: “Chuck Hammer came to our sessions with the first guitar synthesizer we’d ever seen or heard," explained producer Tony Visconti. "He gave us a quick demonstration of how he would pick a note, and out of his amplifier would come a symphonic string section.”

With Bruce Springsteen and the E Street Band recording The River in an adjacent room of the Power Station studio in New York at the same time, Bowie recruited E Street Band keyboardist Roy Bittan over to play piano on the track.

Released August 1, 1980, as the lead single from Bowie's 14th studio album, Scary Monsters (and Super Creeps), "Ashes to Ashes" was an immediate hit, becoming one of the artist's fastest-selling singles in England. Debuting at #4 on the UK Singles chart, "Ashes to Ashes" shot to #1 on the chart for the week of August 23, 1980. It was Bowie's second #1 in his native country, following ironically enough, a re-release of "Space Oddity" in 1975.

“Something like ‘Ashes to Ashes’ wouldn’t have happened if it hadn’t have been for ‘Inchworm,’” Bowie told Performing Songwriter (via American Songwriter) in 2003. “There’s a child’s nursery rhyme element in it, and there’s something so sad and mournful and poignant about it. It kept bringing me back to the feelings of those pure thoughts of sadness that you have as a child, and how they’re so identifiable even when you’re an adult.”