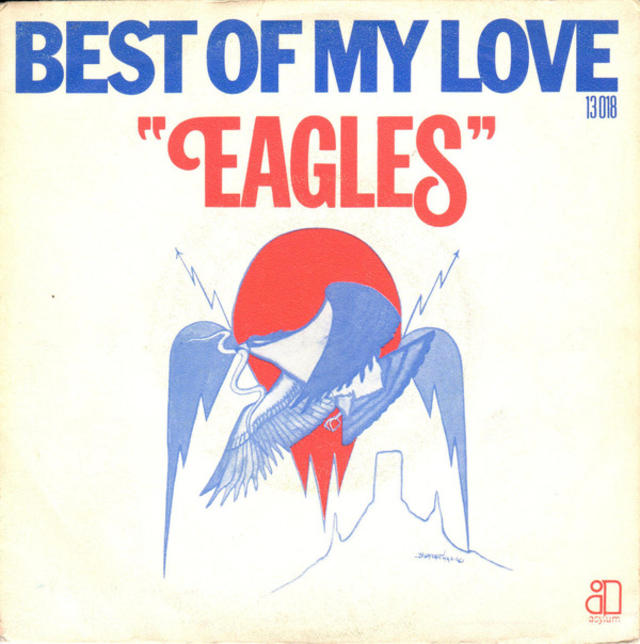 It was a rough road for Eagles when it came time to record the band's third studio album, On the Border. Working in London with famed producer Glyn Johns, it was a short-lived arrangement as the two sides fell out over the direction of the record. While Glenn Frey and company relocated to Los Angeles to complete the full-length, a few of those tunes recorded with Johns made the final cut. Among them: third single "Best of My Love."

"A lot of the lyrics were actually written in Dan Tana's at a booth we liked to sit in, on the front side of the bar area," Don Henley told Cameron Crowe in 2003, referencing the famed West Hollywood restaurant that's just down the blown from the Troubadour nightclub. "J.D. Souther wrote the bridge and it was perfect. That was the period when there were all these great-looking girls who didn't really want to have anything to do with us. We were just scruffy new kids who had no calling card. We could be cocky at times -- which was really just a front -- but we weren't very sophisticated or confident. We were typical, frustrated, young men. We wanted the girls to like us, but we had all the immature emotions that young men have -- jealousy, envy, frustration, lust, insecurity, and the lot."

In regards to the music, Glenn Frey admitted that he stumbled across the melody in an attempt at emulating Joni Mitchell: " I was playing acoustic guitar one afternoon in Laurel Canyon, and I was trying to figure out a tuning that Joni Mitchell had shown me a couple of days earlier," Frey told Crowe. "I got lost and ended up with the guitar tuning for what would later turn out to be 'The Best of My Love.'"

Released as the third single from On the Border in November 1974, the sweet acoustic tune soared up multiple charts. On the Hot 100, it became the Eagles first #1 hit, assuming the top spot for the week of March 1, 1975. Over on the Adult Contemporary chart, "Best of My Love" took the #1 position for the week of February 1, 1975.