THE ONE AFTER THE BIG ONE: Phish, THE STORY OF THE GHOST 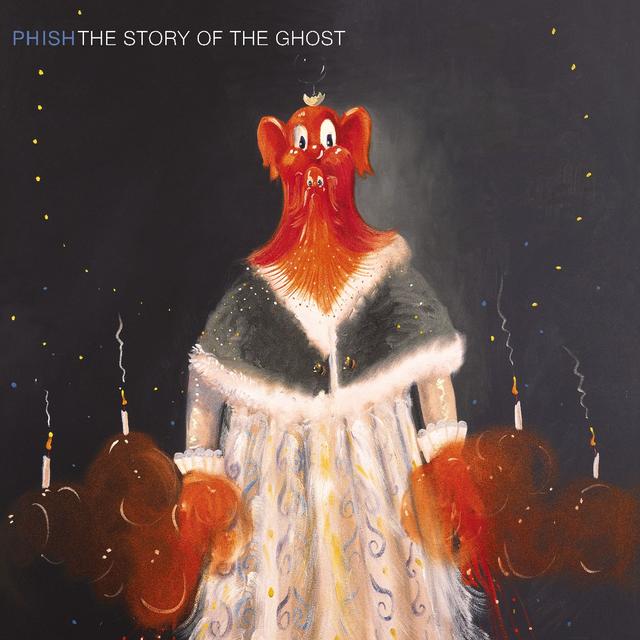 Like the Grateful Dead, to whom they are often (and often unfairly) compared, Phish are equally adept at creating songs that are conventionally structured and songs whose intent is to crack those structures open, spilling out all manner of improvisational goodness. The studio albums they made in the stretch between BILLY BREATHES (1996) through UNDERMIND (2004) were examples of the former – filled with songs that vacillated between simple and more intricate, but which, foundationally, were more traditional (and, in some cases, even radio-friendly; BILLY BREATHES hit the Top 10 – the first of Phish’s albums to do so). The band could (and often did) open them up wide during their fluid, expansive live shows, finding different pathways through solos or extemporized instrumental sections, but at heart they were songs, with verses and choruses and the like.

Released in the midst of that period, 1998’s THE STORY OF THE GHOST was created in almost reverse fashion, beginning with improvisational jam sessions (some of which turned up on the subsequent release THE SIKET DISC) that the band mined for material that later turned up on GHOST. The result is a groovy, even funky album that captures a unique moment of creation for a band known largely for their impulsive creativity.

“Ghost” starts the album with the thump of Mike Gordon’s bass way up in the mix, and a collection of odd sounds woven into Trey Anastasio’s wah-wahed guitar in the background. During the breakdown, Gordon executes a lesson in slapping and popping that almost makes you want to check the album cover again, just to make sure you’re listening to, you know, Phish.

Indeed, you are – a realization you come to when “Birds of a Feather” barges in with Jon Fishman’s rat-a-tat drums and the song’s sort-of-aimless lyrics. Yup – that’s Phish, and THE STORY OF THE GHOST is chock full of songs, like “Birds,” that the band has treated its fans to live for years. The instrumental “Guyute,” already eight minutes long on record (and replete with shifting time signatures and wild guitar dynamics), will nearly always get an extended workout. “Wading in the Velvet Sea” floats by on a breeze of close harmonies, and “The Moma Dance” will always sound like it was written for some movie’s soundtrack in 1975.

THE STORY OF THE GHOST is a study in persistent, groove-centered music and structured songs, and is a hidden gem in the Phish discography. It’s intriguing and engaging, and worth cueing up, for the fan and curious soon-to-be fan alike.

The Story of the Ghost