February 1983: When Ramones Roared Back with SUBTERRANEAN JUNGLE 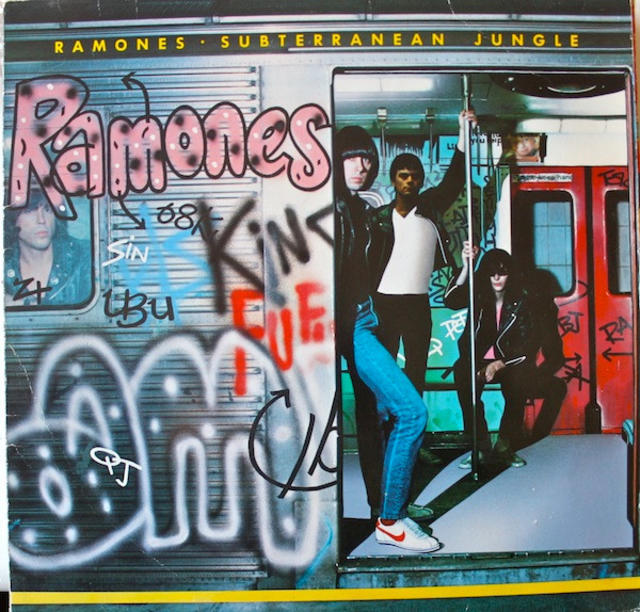 It's no secret that the Ramones weren't exactly in the best place when it came time to record the band's seventh studio full-length, Subterranean Jungle. Addiction issues were running rampant, with drummer Marky Ramone's alcoholism getting to the point that he was fired. The drummer had a feeling things were going awry during the album cover photo shoot on a NYC subway car, when photographer George DuBose positioned him behind a window away from the rest of the band members. "They were kicking him out of the band, but he didn't know it yet," DuBose recalled later.

The fractured band convened in Long Island's Kingdom Sound studio to make the record, with new producer Ritchie Cordell at the helm. The inspiration behind tapping Cordell for the duty: his work on Joan Jett and the Blackhearts' breakout smash, "I Love Rock 'N Roll."

"I don't think I ever discussed it with the guys directly, but I think we all thought [Joan Jett & The Blackhearts'] I Love Rock ’N Roll was a really great song," Dee Dee Ramone explained in the liner notes for Rhino's 2002 reissue of Subterranean Jungle. "It was cool it could get on American radio. I thought it was time for the Ramones to get on the radio, especially since we paid tribute to the same kind of bands that song did."

A Ramone not a fan of Cordell: drummer Marky Ramone, who let his feelings known during a 2015 interview: "I cannot stand Subterranean Jungle. At that time, the producer, Ritchie Cordell, was trying to imitate a drum machine. That '80s, dry, let's-put-the-towel-over-the-snare drum sound. It didn't work. Not for the Ramones."

It was February 23, 1983, when Ramones dropped Subterranean Jungle in US record stores. Kicking off with a pair of covers--The Music Explosions' 1967 single, "Little Bit O' Soul," and Bobby D Waxman's "I Need Your Love," (with a take on the Chamber Brothers' "Time Has Come Today" tucked onto Side 2), the record is highlighted by some true Ramones classics; none more so than "Psycho Therapy."

"I knew we needed a real mental Ramones song for the album, and I knew John was depressed with how things had been going," Dee Dee Ramone mused in 2002. "He needed that song to get excited about the band again."

Johnny Ramone had praise for Dee Dee during a 2002 interview with Rolling Stone: "Dee Dee was a very unique character, the most influential punk rock bassist," he said. "He set the standard that all punk rock bassists look to. [His songs] weren't like anything else, just crazy, crazy stuff — like 'Highest Trails of Above' on the Subterranean Jungle album, even '53rd and 3rd' and things like that. Just everything, the whole structure of the song, the whole lyrical content, I don't know of anything else like it. He was a great lyricist."

After the February 1983 release of Subterranean Jungle, the record ambled up the charts to peak at #83 for the week of April 9, 1983. The #1 album in America that week: Michael Jackson's vibe-shifting Thriller.