THIS IS THE ARTICLE FULL TEMPLATE
70s 80s 90s Rock Soundtrack
Lou Reed
P.O.D.
Iggy And The Stooges
THIS IS THE FIELD NODE IMAGE ARTICLE TEMPLATE 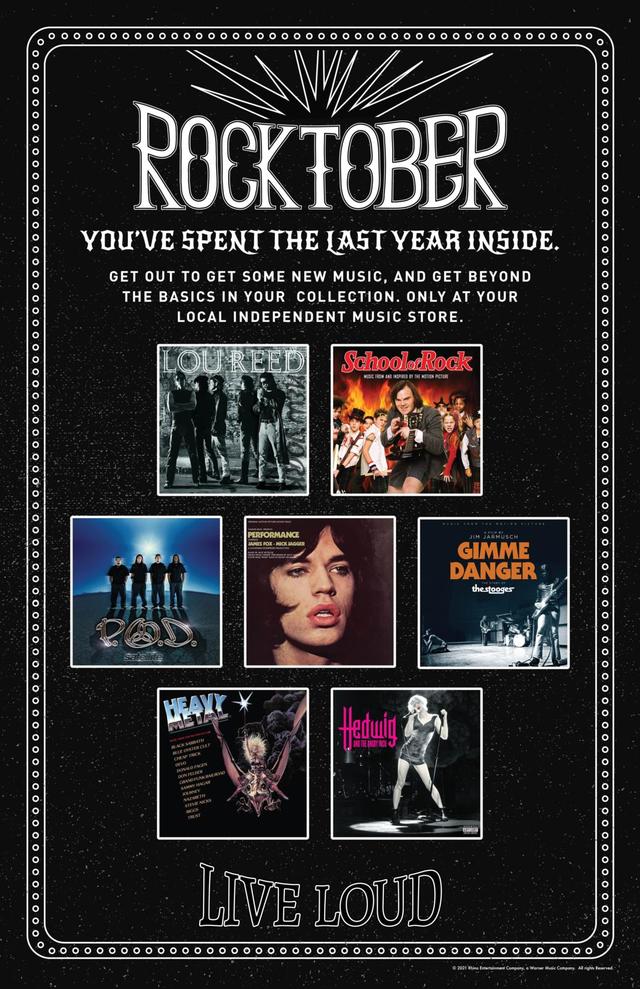 Are you ready to Rocktober? This year, Rhino is unearthing another round of modern classics to be committed to fresh vinyl sides. The 2021 lineup is thick with soundtracks: Heavy Metal, Peformance, Hedwig and the Angry Inch, and the Iggy and the Stooges doc, Gimme Danger, are all slated for release this month. There's also instant favorites from Lou Reed and San Diego rockers, P.O.D.

Rocktober 2021 kicks off October 8 with Lou Reed's 1989 release, New York. The album featured single "Dirty Blvd," which shot all the way to #1 on the Billboard Modern Rock Tracks chart. The new reissue will arrive on a clear vinyl double-LP.

October 8, 2021, also sees a new version of School of Rock (Music From And Inspired By The Motion Picture). The Grammy nominated soundtrack of the legendary Jack Black movie is packed with classic rock favorites from AC/DC, The Clash, The Doors, The Who, and Black Sabbath. Most notably, the soundtrack includes Led Zeppelin's "Immigrant Song," which had previously always been denied permission to appear in films. This version will be pressed on double orange vinyl.

The rest of the Rocktober 2021 release schedule look like this:

Various Artists - Performance (Original Motion Picture Soundtrack)
Starring James Fox as a British gangster on the run who finds refuge in the home of reclusive ex-rock star Mick Jagger, Donald Cammell and Nicolas Roeg's PERFORMANCE is one of the great cult movies of the 1970s. The film's soundtrack, produced by Jack Nitzsche for Warner Bros., is equally noteworthy. Needless to say, the Rolling Stones connection is strong; the Jagger-sung single "Memo From Turner" was co-written with Keith Richards, and vocalist Merry Clayton (famous as the duet partner on "Gimme Shelter") appears on three tracks. Several up-and-coming WB artists also make key contributions, including Randy Newman (the raucous "Gone Dead Train"), slide guitar virtuoso Ry Cooder and Little Feat leader Lowell George. Like the film itself, the PERFORMANCE original motion picture soundtrack offers a fascinating glimpse at one of the most exciting eras in rock. The album will be pressed on yellow vinyl.

Various Artists - Music From The Motion Picture Gimme Danger
The Stooges are widely considered one of the greatest rock bands of all time and this comes across loud and clear on director Jim Jarmusch's critically acclaimed documentary film 'Gimme Danger.' GIMME DANGER: MUSIC FROM THE MOTION PICTURE is a 14-track collection curated by Jarmusch and Stooges frontman Iggy Pop, with a focus on the group’s first three albums. It includes The Stooges' classics 'I Wanna Be Your Dog,' '1969,' and 'Loose,' along with rarities 'I Got A Right,' 'I'm Sick of You' and 'Asthma Attack,' and songs by MC5, Iggy Pop's pre-Stooges combo The Iguanas, and more. It's one of those rare soundtracks that appeals both to the most discerning fan and also as an introductory to those less familiar. The record will be pressed on ultra clear vinyl.

OUT NOW: P.O.D., SATELLITE (20th Anniversary Edition)
THIS IS THE ARTICLE BOX TEMPLATE