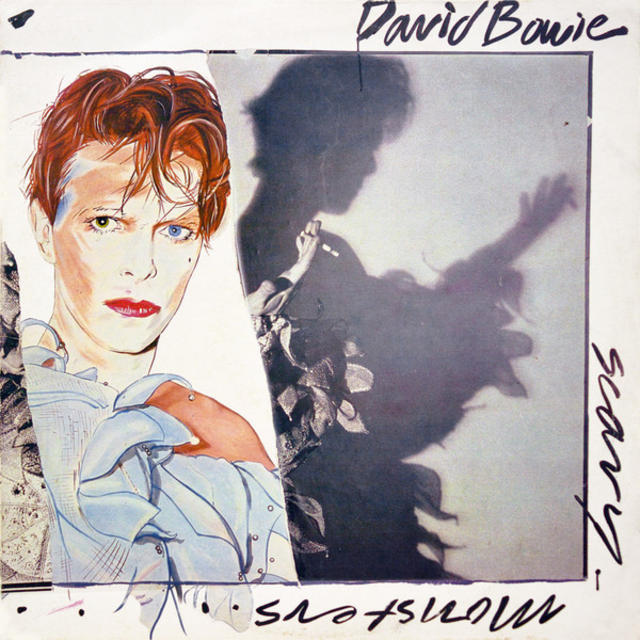 At the dawn of the 1980s, David Bowie was ready for change. Drastic change. Having spent the end of the 1970s isolated in Berlin and crafting the legendary Berlin trilogy of albums--Low (1977), 'Heroes' (1977) and Lodger (1979)--the artist was ready to plunge headfirst back into the global zeitgeist and again push it into the unknown.

“Scary Monsters always felt like some kind of purge,” Bowie said in 2003 (via Classic Rock). “You think: ‘How do you distance yourself from the thing that you’re within?’ I felt I was on the cusp of something absolutely new. There were no absolutes. Nothing was necessarily true, but everything was true. It was this sense of: ‘Wow, you can borrow the luggage of the past, you can amalgamate it with things that you’ve conceived could be in the future and you can set it in the now.’”

In order to realize his lofty vision, Bowie left Berlin to return Stateside, renting a midtown Manhattan apartment next door his longtime guitarist, Carlos Alomar: “Our building was right behind the Fashion Institute of Technology,” Alomar remembered. “When they found out that David lived there, oh my god, they would just ring the buzzer night and day.”

For Bowie, it dropped him right into the heart of the burgeoning NYC music scene, where he befriended and advised the likes of Devo, Talking Heads and Blondie, soaking up the “sense of urgency about the place. Wherever I’m writing, that place tends to make itself very known," he revealed. "Either in the atmosphere or sound. New York feels very street.”

Bowie and company (including Alomar, Dennis Davis on drums, George Murray on bass) convened in the state-of-the-art Power Station recording studio, eager to make use of the space's high-end gear. While Bowie was busy making his 14th studio LP, Bruce Springsteen and the E Street Band were working in an adjacent room at Power Station, leading to E Streeter Roy Bittan to pop in and add pianos to three songs on the record.

Bowie's goals for the album: “David and I had a running joke,” producer Tony Visconti explained. “It was: ‘Let’s make this next record our Sgt. Pepper!’ The Berlin records – Low, “Heroes” and Lodger – were all done in five weeks each. You can’t exactly make a Sgt. Pepper in that time frame. On Scary Monsters we decided to give ourselves the luxury to think of every possible thing we could do. That was the premise. And we took ourselves very seriously.”

In stark opposition to the rapid-fire process during the Berlin trilogy, Bowie spent a good two months crafting lyrics and melodies for the album. Bringing in guitarist Chuck Hammer (who created the signature sounds heard on "Ashes to Ashes") and The Who legend Pete Townshend (who arrived in quite a state, demanding red wine) for "Because You're Young," the artist and his producer knew they had a winner on their hands by the end of the recording process.

“David had many tools in his vocal tool box. He was just about the best singer I’ve ever worked with," Visconti said. "He sings from his soul, from his spirit. My job was to step to the side when he was doing great, but I wasn’t afraid to step in if I felt he could do something better. Sometimes he would challenge me and say: 'Why?' And I’d give my reasons. Then he’d do another take. We were friends since 1967. The reason that we lasted so long together is because he trusted me.”

The fruits of their labor, Scary Monsters (and Super Creeps) was released on September 12, 1980, The full-length followed the successful launch of lead single, "Ashes to Ashes," the update on Bowie's famous "Major Tom" from "Space Oddity." The track scaled the UK charts to peak at #1, making it only his second chart-topping single in his native country (his first was a re-release of "Space Oddity" in 1975).

"Franky, yes, I was," Bowie admitted to Tim Rice in 1980 when asked if he was surprised by the success of "Ashes to Ashes" in England. "To be honest about it, I suppose that Major Tom was this... there's a comfortable feeling with him, being such an old figure of mine. I mean, he goes back to '68, '69, whenever it was. I guess that a lot of people still have some empathy with him, because he became the little sort of... bouncy hero. I just wanted to bring him up to date a little bit."

Featuring second single and MTV favorite, "Fashion," Scary Monsters (and Super Creeps) was the commercial rebound Bowie was looking for, soaring to #1 on the UK Albums chart, and peaking at #12 on the Billboard 200 for the week of November 15, 1980. The #1 album in America that week: Bruce Springsteen and the E Street Band's The River, recorded at the same time and in the same studio as Scary Monsters (and Super Creeps).

As for the album's title, it had less to do with Bowie's run on Broadway as The Elephant Man, as suggested by Rice, and more with a box of breakfast cereal: "It actually came from a Kellog's Corn Flakes packet," the singer revealed. "On the back, it said, 'Buy your packet of Kellog's Corn Flakes, and inside you will find scary monsters and superheroes.' As I was writing a New York album, it seemed the perfect sort of collective title for the bits and pieces I was writing on it."